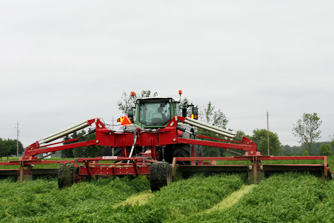 Lorentz Farms Ltd. has been providing farmers and feed mills dehydrated alfalfa meal and pellets since 1951.  Our farms sit comfortably on the rolling hills of St. Clements in South Western Ontario, Canada.

We establish, maintain, and harvest all of our own crops specializing in alfalfa.  We rotate with wheat, barley, oats, beans, corn and custom forage mixes upon request.  We use new technologies and keep our line of machinery updated in order to harvest our crops at their peak nutritional levels.

The family run farm is not only one of the largest but also the longest running dehydrated alfalfa producers in Ontario.  Lorentz Farm’s is run by George and wife Lynda Lorentz along with Kory and wife Lisa Lorentz.

We, at Lorentz Farm’s, believe in and promote sustainable agriculture:  that is maintaining healthy soil with natural means as much as possible so that we don’t deplete the soil that we rely on to grow our feed/food.  Healthy soil produces healthy plants that can withstand disease and insects so that pesticides are rarely needed.  We are constantly testing to improve our soils that give us life.

Contact us today to see how we can serve you.

Edward J. Lorentz founded Lorentz Farms Limited back in the mid-1930s. Ed built and operated two chopping mills, one in St. Clements and the other in Maryhill, Ontario.   In the late 1930s he started custom bailing hay and straw with an old army jeep and bale press making 100 to 120 pound bales that were wire tied. In the late 1940s he bought a small square bailer for hay and straw and was trucking the bales to three large horse tracks in the Toronto area as well as Seagram’s in Kitchener to feed the thousands of sheep they once had.

In 1950, Ed bought his first portable hay dryer which he used to custom dry hay on the neighbouring farms around him. In 1951, Ed decided to build a stationary dryer on the present property and produced alfalfa meal that the company was bagging in 100 pound bags.  The alfalfa plant would run six days a week 24 hours a day during the busy summer months through the 1950s and 60s.  In 1960, he then built a feed mill to produce feed for the thousands of hogs that he had contracted out to neighbouring farmers.  Along with the hogs, Ed also had three barns full of finishing beef cattle that he fed year-round with his manufactured feed.

A pellet mill was installed at the mill in 1964. He decided to make pellets so that storage and shipping became more economical.

In 1982, Ed’s son George took over and operated Lorentz Farms.  The business continued to run smoothly growing each year.  In 1994, George put in the second drying system at the same location to increase capacity.

In 1997, George’s son Kory graduated from the University of Guelph’s agricultural program and became a full-time employee on the farm.  In the year 2000, the computer system on the dryer was completely updated in the mill and a solid fuel burner was added for the drying process.  The principle of the dehydrating process has stayed the same since the 50’s but the components were/are continuously being upgraded as technology advances.

Since the millennium, we have invested a great deal of time in researching ways to improve soil health in order to maintain the highest quality alfalfa possible.  Our machinery has continued to increase in size allowing us to have less tire marks in the field which improves stand health and longevity.  The use of GPS keeps all of our machinery at its peak usage saving fuel and unnecessary emissions for the environment.

We are very grateful of the vision Ed had for this growing business.  With honest and dedicated work, we plan to continue to add to this legacy!